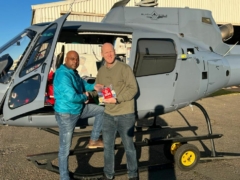 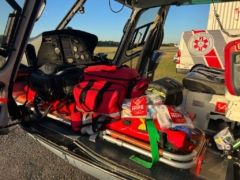 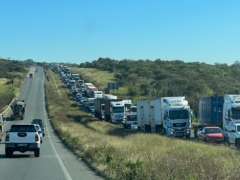 For the past month, we have been partnering with Convoy of Hope by sending 4 truckloads of food and fresh water to aid thousands of people affected by the recent flooding in Durban and surrounding areas.  The death toll is 459 and many of these were children.  In addition to Convoy of Hope, we partner with Focus on the Family in Durban, and a group of 40 smaller Methodist churches that are our main distribution partners in this area.

For the past 20 years, I have realized that you have to be hardy to survive on the African mission field.  It is not for the faint of heart.  We have faced many challenges over the years, and this past weekend, Dustin and Alexandra faced a big one.  They were en route to Durban with a vehicle full of personal hygiene kits provided by Convoy of Hope to deliver to victims of the flood. This was the first road trip that Dustin has taken since his neck surgery 6 weeks ago.  It is usually about a 5-hour journey with good interstate highways most of the way.  They were just about one hour outside of Durban on Saturday when traffic came to a complete standstill at approximately 6 pm.  They were boxed in, in the middle lane of the interstate, and unable to find any news on the radio or their WhatsApp. Eventually, they learned that a horrific traffic accident that had claimed 16 lives was ahead. It had happened around 2 am Saturday morning and the investigation and cleanup was still going on.  They had a little water and enough fuel to periodically turn on the vehicle to keep warm during the night as the temperature dropped to the mid 40’s Fahrenheit. They kept their doors locked and were awoken at 5:30 am to the sound of horns as traffic finally began to move. They arrived at their hotel by 7 am and got some much-needed rest, water, and food. We thank God they arrived safely, and we pray for the victims, rescue personnel, and witnesses of the terrible accident.

Dustin and Alexandra spent the next couple of days meeting with ministry partners and working with Alex’s bother-in-law who owns an emergency medical service company and helicopters that have been assisting with rescues and disaster relief.

Beth and I plan to travel to South Africa to join them in mid-June.  Please pray that our time there will be fruitful and that we will be able to get lots accomplished.